"There is no possible way you can do worse than Eljay."
―Ven, Ven's Moc Spotlight.

Eljay Johnsen, formerly known as simply Eljay, is a founding member of The TTV Channel. In recent years, he has hosted the Recap Reviews, and was most recently the host of the Ninjagocast as well as the show Pins & Axles. He was fired from the group due to internal conflicts with the cast on August 31st, 2017, but returned as a full cast member in the Ninjagocast episode livestreamed on March 18th, 2018.

As a child, Eljay was a fan of BIONICLE, as well as LEGO Exo-Force and Adventurers. Eljay was first recruited into iBZP by Mesonak, whom he knew from BZPower and the BZPC chatroom community. He has remained in the cast ever since.

Eljay began his career on YouTube by announcing a film series, called Biocraft, based on classic BIONICLE lore as told via the Minecraft medium. Production of the film went through a tumultuous development cycle, and despite being announced in 2011, the project eventually went on hiatus in 2014, and an eventual cancellation shortly there after.

In January 2013, Eljay began his most popular series, the Recap Reviews. Near the end of June, he briefly hosted a play-through of the 2004 game Maze of Shadows with then-host Alena; however, the series ended less than a month later.

Come February 2014, Eljay and Mesonak began a series where Mesonak played through old BIONICLE games, with Eljay providing assistance. The first episode of MNOG with Meso aired on February 18, 2014.

At some point before July 2014, Eljay briefly went on hiatus due to work. However, on July 1, 2014, TTV received, from an unknown benefactor referred to as "Highly Suspect", a black-and-white picture showing a display stand of BIONICLE sets -- the first real indication of a BIONICLE 2015 return -- and Eljay joined with the others for an impromptu discussion video about the image.

On November 2nd, 2014, Eljay joined with Varderan, Venom, Kahi, and Mesonak for the livestream celebrating TTV's achievement of reaching 10,000 subscribers. Eljay was the one asking the trivia questions for the prize giveaways. It was also revealed during the livestream that BIOcraft was going on hiatus.

In 2015, Eljay completed his collection of BIONICLE sets, which he uses for the Recap Reviews.

On TTV episode 137, which took place shortly before April 1st, 2015, Varderan fired Eljay from the Podcast. However, this was simply a set-up for an April Fools' prank, in which Eljay took over the channel and the Message board, deciding to host the show himself. On April 1st, The first episode of TTE premiered, at the end of which Eljay and the rest revealed that it had all been a joke.

At one point in time, Eljay had promised to reveal his face to the TTV community during a Makutafest. However, on July 2nd of 2015, Varderan posted the "Big Reveal" poster on a topic. It was quickly flooded by the TTV Message Board users who anticipated Eljay's reveal of his face.

However, as the big moment drew closer, it turned out that Eljay couldn't reveal his face due to "copyright issues" and instead unveiled a new mask. This reveal was in tandem with the announcement of TTV shirts.

During the TTV Civil War event for April Fools' Day 2016, Eljay changed his name on the Message Boards to the pun-focused Captain Jay, representing and referencing Marvel's Captain America, and the leader of Team Eljay.

Near the end of the Recap Review finale on December 13, 2016, Eljay took off his mask and revealed his face to the world. Despite no longer needing to wear it, he has utilized it in videos since, and additionally brought it with him to Brickfair Virginia 2017.

After the Recap finale, Eljay produced a few episodes of a show called "Pins and Axles". In this show, he weighed community thoughts and personal experience on some basic questions from BIONICLE fans. Three episodes were released and a fourth was in production when he and TTV parted ways.

When Ninjago: Masters of Spinjitzu Season 7 "Hands of Time" launched in the US in May 2017, Eljay began hosting a Ninjago podcast, dubbed NinjagoCast, to which is often appended "Masters of Podjitzu".

On August 31st, 2017, Eljay was formally let go by the channel due to internal conflicts. He continued to make videos on his own channel, separate from TTV.

On March 18th, 2018, Eljay returned to the TTV Channel, after it came to the attention of the TTV crew that Jonathan Juan had conspired to get him fired. Jon was fired in light of these circumstances, as well as on the basis of other more serious issues, including a string of sexual harassment and abuse aimed at fellow TTV members Prpldragon and Phweffie.[1]

Upon his return to the channel, Eljay resumed hosting Ninjagocast, and began to co-host The Brickfeed Podcast alongside Exxtrooper. On September 19th, 2018, Eljay released a video announcing a new review series, aptly titled Eljay's Retired Reviews. He has since publicly discussed having many new videos in production, which will be seen over the next two years.

Not much is known about Eljay, mostly because he historically preferred to keep his normal life hidden by a cardboard Miru that he wore at all public appearances for most of his career as an entertainer. He did so to conceal his identity and maintain personal privacy, while also cultivating an aura of mystery and a memorable, iconic appearance.

Eljay is a bit sheltered, as commented on in the Roodaka Recap Review numerous times. However, in reality Eljay can be a nice guy, even if he's a subject of teasing by the other TTV cast members.

Eljay is also known for his excessive knowledge on BIONICLE, often correcting people like Jon on things they assume. However, his knowledge does not always lean on his side of the argument, sometimes proving his ideas wrong. That's not to say that Eljay is a walking BIONICLE encyclopedia, because he does not know everything; however, Eljay naturally has a deep love for the BIONICLE canon and story, and when it's challenged, he will often defend it. 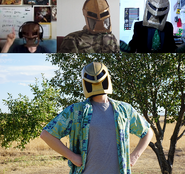 Ejay's masks through the years

Eljay's Cast Member image; created by Prpl
Add a photo to this gallery

Retrieved from "https://the-three-virtues.fandom.com/wiki/Eljay?oldid=9281"
Community content is available under CC-BY-SA unless otherwise noted.